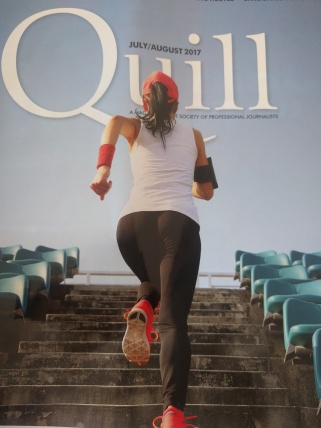 To the SPJ Board of Directors:

What does a woman’s butt have to do with a journalism conference? The answer is, of course, nothing, but that’s not what thousands of SPJ member were led to believe when they looked at the July/August issue of Quill.

I kind of understand how this happened. Someone was like, “Hey, we need art for a feature called ‘Training Day,’ which will connect the concept of boot camp to sessions offered for the 2017 Excellence in Journalism conference!” and someone else was like “Let’s do a woman running up a flight of stairs!” All of which is pretty problematic in and of itself, but the execution is completely inexcusable. We don’t get to see this woman’s face, she is simply an object, and the focal point of the cover photo is her butt.

I’m not alone in thinking this was a colossal screw-up. By the time I decided to take my concerns to Twitter, another journalist in Texas had tweeted about the same thing. After I posted my feelings about the cover, I received an overwhelming response from the New Mexico (where I’m based) journalism community expressing their outrage at the photo.

“‪@spj_tweets‪ I am FURIOUS. With all the “locker room talk” and sexism in tech discussion, you think THIS is an appropriate cover??.”

They gave me the following reply (the same reply that was given to the Texas journalist):

“Thank you for taking the time to share your opinions with us. We value your input. The photo was chosen several weeks ago to represent a story about training yourself. Our opinion, and that of others we have talked to, is that the photo is not sexist. Rather, it depicts a woman wearing typical workout clothing. We are sorry some readers find it offensive.”

This is—let’s be honest here—a pretty shitty explanation and an even shittier apology. The comment about “chosen several weeks ago” seems to imply that the same photo would not have been chosen in light of the Google manifesto story, which is a sort of tacit admission that the photo is, at the very least, insensitive. I don’t think I need to tell anyone on the board that sexism is a very long-standing issue in this country, not to mention in our profession.

And let’s talk about “depicts a woman wearing typical workout clothing.” Yeah, but, like, why? Why was it necessary to depict a faceless woman in spandex working out and not like, male and female journalists working out together? Or maybe, if you did use a woman for the photograph, a focal point that wasn’t her butt? Just spit-balling here.

I have a feeling that some of you think I am blowing this out of proportion, but I also have a feeling that some of you know that I’m not. Maybe some of you have had some of the same experiences that I’ve had in the journalism industry. You know, the ones that aren’t something worth filing a sexual harassment or discrimination lawsuit over, but the ones that very quietly tell you that you maybe you don’t deserve the same respect or opportunities as your older, whiter, male-r colleagues. And some of you know I’m right when I say that when a young woman at the beginning of her journalism career goes into her editor’s office and sees that picture on his desk, she’s going to be ever-so-slightly less likely to ask for that raise she knows she deserves.

The part of the SPJ Code of Ethics I hold most dear is the line that says, “Be vigilant and courageous about holding those with power accountable.” I have a version of this statement written on a Post-It and stuck to my computer. It’s hard to imagine another time in our nation’s history when that idea has been more relevant, for all journalists, no matter what they cover. I primarily write about business, and I spend a lot of time thinking about how the actions of powerful companies—Facebook, Amazon, and the like—affect state- and local-level issues, particularly those related to marginalized communities. It’s about “giving a voice to the voiceless,” right? If we abandon our mission to “afflict the comfortable and comfort the afflicted,” we abandon our duties as the Fourth Estate.

In this situation, you are the powerful, the comfortable. You are the oldest organization representing journalists in the United States. Quill is sent to thousands of your members, who then throw the publication on their desks, the cover visible to anyone who walks by. Here’s my big ask from you:

Thank you for your time and I look forward to hearing from you soon.

Update 8/13/17: Board member Andy Schotz responded to my letter in a blog post. Here is the comment I wrote in response:

Thanks for continuing the dialogue. A few things I want to respond to here:

Lastly, I want to talk about your comment that “sexist” isn’t a fair label for this photo, “as it implies prejudice or discrimination.” But that’s exactly what’s going on here. Not all sexism in our industry is overt, Mad Men-era ideas that women should only write about fashion lest they bleed all over the news page. In this day and age, it is more likely to be subtler, but just as insidious. This photo is discriminatory because it treats the woman as an object and uses her butt as the central focal point despite there being no real reason to do so. It is a lazy choice for a feature package that is essentially an advertisement. While I appreciate this post, I stand by my claims that the SPJ should investigate this issue, apologize, and assure their members this will never happen again.

Update 8/14/17. I spoke on the phone with SPJ president Lynn Walsh. Lynn said SPJ does not plan to investigate further or issue any further statements.

SPJ national secretary-treasurer J. Alex Tarquinio said via Twitter that “the staff didn’t intend to make a sexist cover, but clearly members were offended. If a woman finds it sexist then it is to her. So moving forward, I’ve advised HQ that the new Quill editor should be made aware of the need for sensitivity to diverse subjective views.” When I asked her whether SPJ planned to issue any further statements or investigate the issue further, she said, “I shared what I told the staff as a member, but I can’t speak for SPJ. Only the president or communications office can do that.”

I couldn’t ask for a better close to 2015 than seeing my investigative project on the internment of Coastside Japanese-Americans published in the the Half Moon Bay Review. When I started this project a year ago I figured it would be mostly of historical interest; I am amazed and saddened to see internment invoked by modern politicians in ways that make it clear they have no idea what it entailed.

I have a humor piece titled “Mixed Martial Arts and Crafts” in Defenestration Magazine. Check it out here: http://www.defenestrationmag.net/2013/06/mixed-martial-arts-crafts-by-marie-c-baca/

Check out my essay in the most recent issue of Stanford Magazine:

“When I was 8, my family decided to adopt a dog. The local shelter was a filthy, noisy place in the worst part of San Diego, so we chose the first medium-sized puppy we saw, threw $20 at a volunteer and dashed back to the minivan. There were times when we wished we had been more discerning because Katie, as we called her, turned out not to be the most intelligent of creatures . . .” (Read more)

Here’s a piece of humor writing I did for McSweeney’s: http://www.mcsweeneys.net/articles/welcome-to-belindas-private-equity-immersion-daycare

I’ve written a very personal essay for the NYT’s Motherlode blog on how not breast-feeding my son has affected my relationship and career. Here’s an excerpt:

“Several years ago, I was on a flight home from college when the woman sitting next to me — slim, blond, earth mother-y — began to nurse her infant son. The attendant offered her a blanket; it was refused. “What does he want me to do, smother my baby?” she asked me sarcastically . . .” (read more)

I’m on the NYT’s Motherlode blog again, this time giving my take on the controversial book “The Conflict,” which argues that the modern natural parenting movement undermines women. You can find the full post here.

I did a bad, bad thing the other day: Visibly pregnant, I went to a beauty salon and had my hair dyed. That may not seem like a big deal to those unfamiliar with American pregnancy culture, but to see the faces of the other women in the salon you would have thought I had walked in the door with a joint and a half-empty handle of vodka . . . (more)

If you’re in Colorado tomorrow, tune in to 760 AM at 8:35 a.m. to hear me talk about gas drilling and property rights. Background article here.